During every April and May, Jingpohu spreads its waist after her hibernation and the snow begins to melt. The ice in the lake waves upon the water against the gentle breeze. The water smiles against wind. “ Trees wake to be luxuriant and springs begin to trickle". Standing by the side of lake, viewing the white melting snow and the mazarine water, you will get a feeling of “ glittering like new mirror with the cold rays coming out of box”. Willows wave their soft bodies against breeze and enjoy the spring time with a bright yellow and green hue on their lively and energetic bodies. The jade mountains far away look washed and refreshed by bright snow. The pink azalea and white-red cherry blossom decorate the mountains in spring. There seems overflow an intoxicating sweetness in the air. What a crisp and elegant northland spring picture。

June to August, here comes midsummer. In the early morning, the air around lake is extremely fresh. Calm water in the lake looks like a mirror. Willows on the bank wave their soft bodies softly and bend their branches to the water surface. It seems as if fairies are combing their hair and beauties are on their outdoor trip……the light green mountains in far away stretch in waves. There rises the smoke from kitchen chimneys. And fishing songs can be heard dimly. Among the trees, there are tourists fishing beside the lake. Look! Their expecting gaze! Look! Their leisure looks. It seems as if they are the Jiangtaigong upon Wei River（a famous hermit in Chinese history）. Birds have their singing competition which composes a melodious rhythm, which in contrast reflects the loneness of lake. Though in the midsummer, sunshine time is relatively reduced for the rainy season has come. The mean temperature of July is only around 20℃ which makes it a really rare watering place.

September－October, here comes comfortable autumn. Autumn frost dues the mountain ranges to red overnight. Especially the oak trees all over the mountain seems extremely glare. As one of the hardwoods, oak has oval leaves with sawtooth margin, broad leaf, whorled, around 4－6 leaves a group. Oak tree is around 2 meters high. Leaves becom to be red from yellow and red color becomes the dominant tone decorating the mountains around lake and the mountains at last become a pure red piece.
Before sunrise in the morning, cloud and mist of Jingpo Lake are most splendid. Water vapor rises from the lake and forms ever-changing cloud and mist by the foot of mountains which make the lake and mountains in a clear contraction and appear to be numerous beautiful images.

The lakefront is shrouded in a dark red light when dusk comes and setting sunshine leaves its last ray. The returning boat full of autumn color cuts through the lake in the setting sun and leaves behind the break golden waves. 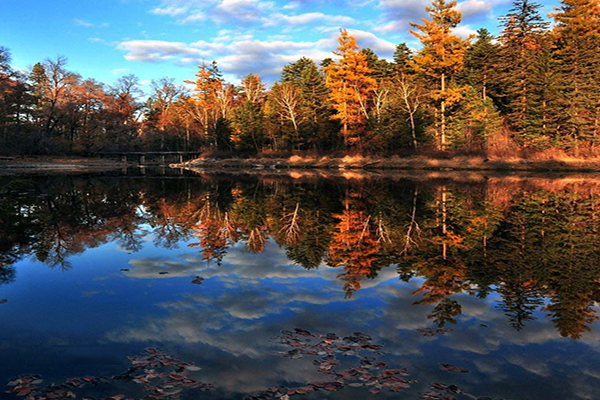 November－the next March, here comes the winter which is described as icing one thousand miles and snowing ten thousand miles. The big lake is covered by silver white snow. The glittering, translucent, white and pure snow purifies the earth. The pride and comely dried trees on the sidehill wave their bodies. The thick snow and frost on the branches on the lakefront are called air hoar. （Picture 34）. The air hoar under the sunshine appears to be pure and clear. Some little red-green spots loom up on the lake surface and when the spots come nearer, it turns out to be the children playing the game of sled drew by dogs. Just a while, they have disappeared in the far white horizon.